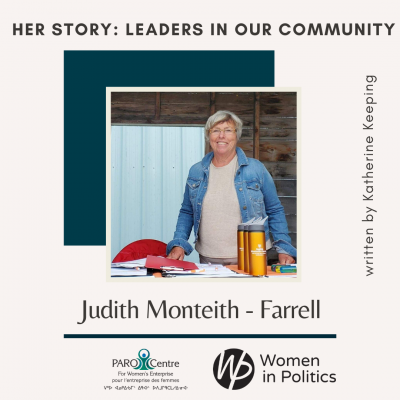 Judith Monteith-Farrell, MPP for Thunder Bay-Atikokan, defines Leadership as “bringing out the best in people and situations. Leadership is the ability to connect. As a feminist, I believe that often leadership should be shared.”

She made the choice to run for office in the hopes that the NDP would form a government and take its vision forward. She looked to an environmental focus, health care & reviewing its funding formulas, & securing social programs – dental & pharma-care. She feels that the role that is missing in a lot of public services is a person to navigate, to guide others that they might receive public services.

In a previous career, Judith assisted people 1-on-1 with WSIB and other services, and saw the cracks. She saw where the system was failing, including housing services. She believes that we cannot as a society “continue to operate in silos.” We cannot continue to act as if our actions do not directly impact our neighbours.

She envisions the path to knowledge about the levels of our political system as a path to empowerment for all Canadian citizens. Judith sees this path beginning in the education system, and how it informs students about what level of government holds what responsibilities. To aide in this effort, Judith speaks at schools throughout the region.

While she realizes that Northerners feel they are not listened to, they can be heard because we have the resources. What is called for is a larger confidence that we can lead change here in the North.

When asked what advice she would offer to women approaching leadership roles, she said that “more often than not women do not give themselves enough credit, or do not believe they are good enough. Trust yourself. You are good enough.”

And on women entering politics, she said “don’t believe that misogyny is dead. It is not. You will be judged differently than a man will be. It is the reality. Your ideas will be ignored, and less experienced men will give you advice. Find a strategy to deal with it. Do not accept it.”

Her family of three grown children and two grandchildren influence her choices. It is in considering them that she looks to how each choice made will impact future generations. When it comes to the difficult choices, she often reflects on her Mother’s advice, “What makes you believe that you are so special you could teach them everything they need to know in life?”

A woman of great strength and conviction, Judith Monteith-Farrell is an unwavering example of her core beliefs in every choice that she makes.