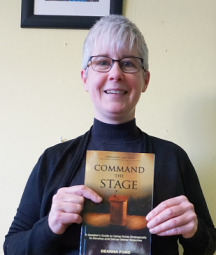 “Outstanding leaders go out of their way to boost the self-esteem of their personnel. If people believe in themselves, it’s amazing what they can accomplish.” ~Sam Walton

Deanna Ford has a history of leadership positions. And while the activities vary, the belief in supporting her team remains consistent throughout.

Prior to moving to Thunder Bay, Deanna was a Sergeant in the Canadian Forces Reserves for over 20 years. For nine of those years, she held the position of Band Master (conductor), with 45 volunteer musicians under her leadership. Members’ ages ran through eight generations.

Deanna says, “As a leader, you take care of your people.” Being supportive of all of the people in the band and creating a safe place were key. The leader sets the tone, and when participants feels safe they both relax and perform better. Deanna learned much about leadership through her experiences in the military when she was a trumpeter in other bands. While most of her experiences were very good, she recalls a few bad ones from which she learned how not to treat others. She vowed to treat people better when she got the opportunity. Good lessons for someone who later took over a volunteer band because as volunteers, she notes that they can vote with their feet.

Over the course of her time leading the band, they played over 400 performances. One very significant performance was a Gala concert for the 100th anniversary of the Communications and Electronics Branch. It was a joint concert with the Royal Signals Band and was a very challenging one for a non-professional group. As the 4th performance by the band in 3 days, this concert had over 600 people in the audience including HRH Princess Anne. The musicians were tired and a little nervous. By modeling confidence and providing encouragement and belief, Deanna’s calm leadership brought out the best in the musicians and the concert was a success.

As an expression of her passion for the environment, when Deanna moved to Thunder Bay she joined the Thunder Bay Environmental Film Network. Today she is Vice President of the organizations and the Festival Chair of the yearly spring film festival. This fall the EFN will be partnering with Eco-Superior to raise awareness about how plastic is harming the natural world including our lakes and oceans.

Another area of concern where Deanna is an advocate is in raising scent-sensitivity awareness. She models a leadership role by speaking up about this topic and encourages others to speak up about what’s important to them. She says, “If you don’t have something you need, speak up.”

To grow her speaking skills, Deanna joined Toastmasters over 10 years ago. Today, she is the Area Director for Toastmasters in the Thunder Bay Area. In this year-long leadership role, she is able to make suggestions and offer encouragement to the six Toastmasters clubs in town. She helps where she is needed and provides opportunities.

Moving forward, Deanna has grown through her speaking career, launching her first book in Nov 2017: Command the Stage: A Speaker’s Guide to Using Notes Strategically to Develop and Deliver Better Speeches. The book offers in-depth guidance on how to develop and deliver a speech. From her background in music and many years speaking, she provides many tips and strategies for speakers that you won’t find many other places. She enjoys helping others to grow in their confidence. Deanna’s book can be found on Amazon.ca and Amazon.com.

A supporter, an advocate, an author, a public speaker, a leader… Deanna Ford encompasses them all.