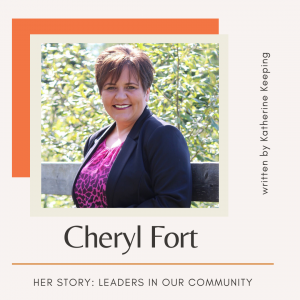 Cheryl Fort is a Servant Leader. She would not require anyone on her team to do anything she wouldn’t do herself. Her most important role is building up others and cheering on their achievements.

Mayor of the Township of Hornepayne, Cheryl Fort stands for the betterment of her community. After attending meetings, she ran for a vacancy on Town Council and her commitment continued to grow from that point.

Cheryl has sat on the Library Board. She ran the Community Christmas Party for 7 years; entailing gifts, clowns, a colouring contest, and Santa Claus, all in an accessible space with lunch provided. Cheryl believes in setting those who follow you up for success and mentored Pamela Moore to take over the Christmas party and it is still a successful event in the Hornpeayne today! Cheryl also believes that knowing when to step back and allow others to flourish is a part of authentic and good leadership.

In examining mentorship as a part of all leadership, she feels that it begins with being organized yourself. That degree of planning can then be passed on to the next person. She speaks of mentorship both as advice and as an example set.

Cheryl Fort recognizes the mentorship received from Women in Politics in her political journey, in particular, City Councillor Rebecca Johnson and Mayor Wendy Landry. Cheryl says that, “being mentored is having support and knowing that you can call someone separate from the situation.”

Her choice to run for Mayor was guided by the fact that she strongly believed that Hornepayne needed change.  Cheryl did not agree with the direction that the leadership of the time was taking the community in and believed that another term sitting under that type of leadership would be fruitless, both personally and communally. She felt confident running, as she believes that a Mayor should have Council experience first and board experience, plus multitude of community involvement. Running as an underdog, she was encouraged by Mayor Wendy Landry to “stick to your platform and be positive.”

While working as both Mayor and as a Locomotive Engineer, she also sits as a Director for the Ontario Good Roads Association for the Northern Zone. Knowledge is key for our communities when it comes to infrastructure and transportation.

Cheryl Fort’s advice to women leaders is to “take care of yourself and have balance. Your confidence will erode without balance.”